The Star : Mobilising an army of mothers 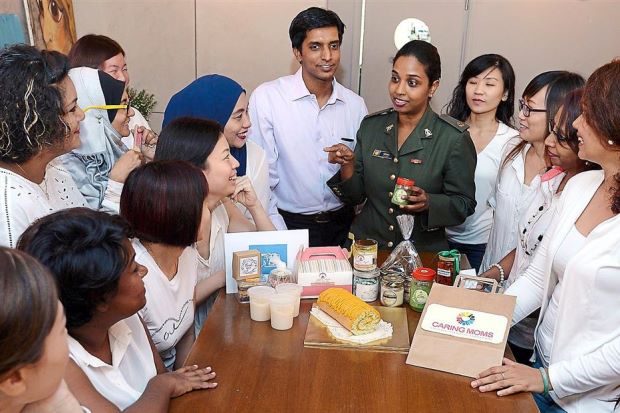 KUALA LUMPUR: An army of empowered Malaysian mothers is on the march thanks to a Facebook group aimed at increasing their economic power.

Their ranks have swelled to 30,000 members in less than three months and it is all thanks to Mejar Shera Ann Bosco, 39, a mother of a seven-year-old, and Indian expat engineer Umesh Narasimhaiah, 35.

In April, they started the Jobs for Caring Moms Malaysia – Babysitter, Tutor, Daycare FB group, a public platform for mothers to buy and sell goods and services.

“In a corporate scenario, mothers are often sidelined. But mothers are practically super-powered!” Umesh said, estimating that the group’s daily transactions were valued at more than RM10,000.

The group also connects working and stay-at-home mothers, and seeks to motivate and build confidence. It is a tapestry of friendships, and wonderful and inspiring stories.

Stay-at-home mom Shirley Ann David, 37, makes pickles from her grandmother’s secret recipes, caters up to 30 meals a day and is able to give more time to her three children.

Private tutor Soon Lian, 42, turns moringa leaves into powder and sells them but at the same time gives them for free to cancer and diabetes patients in need.

Thirty-six-year-old Dionne Fran­ciscus’ best-seller is mutton curry and her biggest supporter is her husband Leon.

“It’s like we’re dating all over again,” he said. “Only now it’s shopping at midnight or waiting in the market for the ‘goat guy’, we have him on speed dial!”

And Ivy Lim, 38, makes healthy bakes that are organic, as well as sugar- and salt-free which she first created for her second son, diagnosed with leukaemia when he was eight months old.

“This is a group of perfect strangers who understand the needs of another mother,” said Lim.

There are baby photographers and travel agents, tuition teachers and massage therapists.

Mejar Shera and Umesh are the group’s sole administrators – no small task in a (growing) sea of 30,298 members, both with full-time jobs to boot.

“It’s very challenging because it’s such an active and engaged group. It’s a 24-hour job,” said Mejar Shera, who has a well-developed EQ, and an uncanny knack for faces, names and stories.

Better known on social media as Mummy Juls, she has been with the Malaysian Armed Forces, commissioned into the Royal Signals Corps (Rejimen Semboyan Diraja) for 22 years.

“We don’t deal in charity work. This group is about empowerment and selling based on merit.

“We don’t want anything to undermine the value of these ama­zing women,” she said.

Men are allowed into the group but only as buyers; the sellers are all women.

And transparency is insisted on in pricing and product details.

“That’s very important to build trust. We have rules such as not hijacking other members’ posts,” said Umesh.

“Ranting on the wall is not allowed, because we want every­thing to remain constructive and positive; that sets us apart from a lot of other groups.”

The CM group is planning its first bazaar on Aug 20 and 21 at the Evolve Concept Mall in Ara Daman­sara. There will be 50 booths, with up to 100 vendors.

In the face of a myriad challenges, both Umesh and Mejar Shera are driven not only by a deep-seated desire to support Malaysian mo­thers, but by their own mothers.

“My mother was proud the day I graduated from military school,” said Mejar Shera.

“But I have never seen her as proud as when I told her what we had set up. She is 68, and she is now thinking about what she can contribute to the group