Never Give Up! Must Read 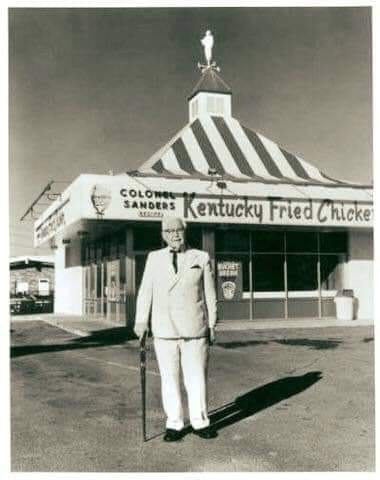 NEVER GIVE UP! I feel like someone needs to hear this today…
At age 5 his Father died.
At age 16 he left school.
At age 17 he had already lost four jobs.
At age 18 he got married.
Between ages 18 and 22, he was a railroad conductor and failed.
He joined the army and washed out there.
He applied for law school he was rejected.
He became an insurance salesman and failed again.
At age 19 he became a father.
At age 20 his wife left him and took their baby daughter.
He became a cook and dishwasher in a small cafe.
He failed in an attempt to kidnap his own daughter, and eventually, he convinced his wife to return home.
At age 65 he retired.
On the 1st day of retirement, he received a cheque from the Government for $105.
He felt that the Government was saying that he couldn’t provide for himself.
He decided to commit suicide, it wasn’t worth living anymore; he had failed so much.
He sat under a tree writing his will, but instead, he wrote what he would have accomplished with his life. He realized there was much more that he hadn’t done. There was one thing he could do better than anyone he knew. And that was how to cook.
So he borrowed $87 against his cheque and bought and fried up some chicken using his recipe, and went door to door to sell them to his neighbors in Kentucky.
Remember at age 65 he was ready to commit suicide.
But at age 88 Colonel Sanders, founder of Kentucky Fried Chicken (KFC) Empire was a billionaire.
NEVER GIVE UP!